That a form of prison garb would develop into a fashion trend seems highly unlikely, but history shows that sagging pants, that is the trend of wearing one's pants well below the waistline in a suggestive manner, has defied this very norm.

That a form of prison garb would develop into a fashion trend seems highly unlikely, but history shows that sagging pants, that is the trend of wearing one’s pants well below the waistline in a suggestive manner, has defied this very norm. 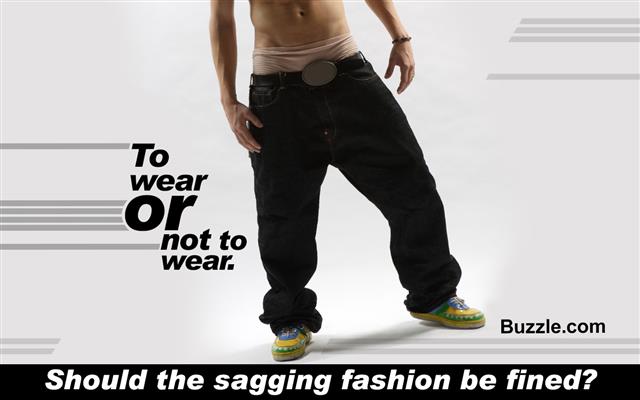 Over the past two decades, sagging has emerged as one of the most infamous fashion trends in many parts of the world. In fact, the world has been divided into two groups: people ‘for’ this trend, for whom it is all about style and comfort, and people against it, for whom it’s plain indecency.

It might come as a surprise, but the origin of sagging pants can be traced back to the American prison system, wherein the inmates were not allowed to wear belts or shoestrings, which could be used as potential weapons during fights, or to commit suicide.

The History of Sagging

The term ‘sagging’ actually refers to the practice of wearing pants below the waist in such a manner that it reveals some part of the person’s inner-wear. In some parts of the world, it is referred to as ‘low-riding’. While the practice is usually associated with male fashion, even females have indulged in it at times. That, however, shouldn’t really be surprising as its introduction in the world of hip-hop music in the 90s made it very popular among the youth all over the world.

It’s highly unlikely that you would come across a fashion trend which is as notorious as sagging. In fact, there came a point when the authorities were forced to step in, and implement laws and regulations to curb its increasing popularity. So, the practice which began in the American prisons returned to the prison with several administrative bodies enforcing laws making sagging a criminal offense that could result in penalty or jail time for the offenders.

In those days, the prison inmates were provided loose fitting uniforms to wear, and were given no belts with them. The prison authorities feared that the inmates could use their belts as weapons to murder other inmates by strangling them. Then there was the possibility of inmates using their belts to commit suicide. If the inmates had to do without shoestrings, it was precisely for the same reason.

In such circumstances, the inmates who got oversized uniforms were left with no option but to let their pants hang loose below their waist. Over the course of time, they became so used to this style that they started wearing their pants low even outside the prison after they were freed upon the completion of their sentence.

The trend of sagging pant got a major boost as a style statement when rappers started sagging on stage and in music videos in the 1990s. This made the style popular among hip-hop fans who fancied following their idols. Soon enough, it became one the most popular fashion trends among youth. For people who followed this trend, it was perhaps a means of rebelling against the traditional stereotype wherein the ‘good guys’ were expected to wear their pants ‘properly’ dress neatly.

The trend of sagging pant didn’t go down well with everyone. Some people believed―and still believe―that the notorious trend was an African-American creation, which was embraced by the mainstream culture.

The trend of sagging pants was associated with homosexuality, wherein a person sagging was thought to be ‘available’ for the prisoners. That, though, seemed more of a baseless allegation, and was dismissed because of lack of evidence. At one point of time, sagging was considered a sign of ones’ inclination towards the life of criminals.

The practice of sagging pants was associated with the world of crime time and again; it was thought that the criminals used the loose clothing to hide their weapons. Whether it is possible to hide weapons in loose clothes is a question which is most likely to be answered in the negative. When it is not possible to run wearing pants that are virtually falling, why would someone make things difficult by hiding weapons in it?

Initial efforts to ban sagging ended disastrously as individuals in support of this style raised the issue of the right to self-expression. The authorities, however, came up with new laws pertaining to indecency in order to curb the rapid growth of this infamous trend. There have been quite a few cases of individuals being sentenced to prison for sagging. In April 2012, for instance, a 20-year-old was sentenced to three days in prison in Alabama for appearing in court wearing sagging pants.

The history of sagging pants shows how an objectionable fashion trend can eventually become an illegal practice, severe enough to warrant time behind bars; which is kind of ironic considering that prisons is where it all started at in the first place.